Interview with Jud King: an author’s perspective on the rewards and challenges of open access book publishing 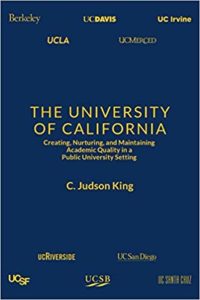 Jud King is Provost and Senior Vice President, Emeritus of UC, as well as former Provost – Professional Schools and Colleges, Dean of the College of Chemistry, Director of the Center for Studies in Higher Education, and Professor Emeritus of Chemical and Biomolecular Engineering at Berkeley. He has recently written a book¹ on the entire University of California, exploring “the structural, policy, operational, and environmental matters that have contributed to [its] success…” Published by the Berkeley campus Center for Studies in Higher Education in January, 2018, the book is both open-access and, essentially, self-published. We asked Jud to reflect on his experience with this OA publishing project.

Why did you choose open-access publishing?

My chief goal was to keep price from being a barrier to purchase and distribution. Also, the California Digital Library and eScholarship are to some extent my babies, in that both were started during my time as Provost, and I want to do what I can to further their vital missions. I’m seeking readership rather than income from the book, and I also want the book to be available as nearly permanently as possible.

This is actually your second book published open access in eScholarship, and the two books are quite distinct. What prompted you to publish the first one in open access as well?

The two books are at very different points in their life cycles. The first, Separation Processes, has been a well-used text in chemical engineering, originally published by McGraw-Hill in 1971, with a second edition in 1980. It was scanned as part of the Google Book Project. When the book went out of print with McGraw-Hill, I secured the copyright back from them and placed the scan on eScholarship so that the book would continue to be readily available. By contrast, the book about the University of California is a new text, published originally in open access on eScholarship.

What did it entail for you to produce this most recent book as an OA publication?

I wanted to have both the free, open-access eScholarship PDF version as well as print and Kindle versions that would be available at low prices for those who would like the added convenience. There was a lot of do-it-yourself! I had to research the availability of self-publishing services and compare among them, through searches that mostly led me to recommendations from novelists rather than scholarly authors. I chose Amazon’s CreateSpace. To get distribution by online and traditional retailers beyond the U. S. and Western Europe, I arranged for distribution of the print version to those other regions to be done by Ingram Spark, the world-wide wholesaler to vendors and libraries. The Kindle version seemed to be a way, in addition to eScholarship, to reach Africa and much of South America as well.

I had to learn the intricacies of Word, get my own ISBNs, determine ownership of figures and seek permissions accordingly, and find indexing software. (I used Textract and was happy with it.) I purchased copy editing through CreateSpace and was planning to use them for Kindle conversion as well, except that CreateSpace suddenly stopped providing such services before I got to the Kindle-conversion stage. I did interior formatting myself, and my grandson kindly helped with cover design.

The existence of the new Office of Scholarly Communication Services on the Berkeley campus and their linkage with Pressbooks.com should help authors with these steps, which for me took substantial time, and should also give more confidence to OA authors as they go along.

Did anything surprise you about the process?

The greatest surprise was the severity of “link rot.” I came back to the manuscript for final review 6 to 18 months after having written the various portions of the book, and I found that about 30% of my many url references to web sites no longer worked! In many cases some “helpful” person had reorganized the web site, but for some the page had disappeared altogether. I have recently prepared a second printing, which uses a web-site recording service and the Internet Archive as ways of mitigating that problem.

How has OA either helped you achieve or thwarted your goals for the book?

It is too early to say. I think I would have gotten wider initial distribution through the marketing services of a conventional publisher. However, I anticipate that the easy availability coupled with word of mouth and mention on the internet will create a higher rate of distribution as time goes on.

The book is averaging almost 100 views/downloads per month in eScholarship. Your other book in eScholarship, Separation Processes, originally published in 1980, is seeing 400 and more monthly views/downloads. The market for the UC book would seem to be potentially larger than that for the specialized chemical engineering book, but the views and downloads are reversed. Why?

Separation Processes was already well known and widely used when it was placed on eScholarship, and, interestingly, the number of downloads per month now is about the same as the number of sales when the second edition was new with McGraw-Hill 38 years ago, even though the book is also available in print form republished by Dover and available for $40 on Amazon and elsewhere. On the other hand, the new book on UC must establish its own audience, rather than preserving and extending a pre-existing market.

What have you done to make these books visible to the community of readers you seek? What more needs to be done?

For Separation Processes all that I have done is to mention the availability of the eScholarship and Dover versions on my faculty web sites. However, data show that views and downloads of the book come far more through Google searches, professional indices, and sites listing open-access books than through my own web sites. For the book on UC, the Center for Studies in Higher Education and I have distributed flyers at several small-ish meetings and have also sent them to acquaintances and CSHE’s standard distribution list, which is still not enough. With the second printing CSHE and I will distribute announcements in much greater number by email, using what source lists I can find.

Here is where the specialized knowledge and marketing services of a conventional publisher of books on higher education such as Johns Hopkins University Press or Harvard Education Press would have been valuable. There is one book review, and possibly two, by journals underway but not yet published. Creating awareness and marketing are indeed difficult challenges for self-publication.

Are there any particular unanticipated problems in distribution?

All the international Amazon sites, except for one, list the book for purchase. However, the one that does not (yet, at least) is Amazon China. Yet China is the country that is developing hundreds of universities that aim to be world-class, and readers there should certainly want to have this book. The cause of this omission is not clear and I have not been able to find a way to bring about action. Fortunately, JD.com, Amazon’s prime competitor in China, does now carry the book.

How can libraries improve the discovery of these materials?

It would help greatly if there were some way of assuring that open-access books are automatically listed and accessible in electronic form through academic libraries. A good start would be to do this for all UC libraries, and then university libraries as a whole, including any non-university libraries that wish to participate as well. Improvements in subject-matter search through libraries and compendia such as Google Scholar should help too.

There is a “buy” link for your most recent book on eScholarship leading to Amazon. How have sales of the print version been?

Print sales are about half the number of downloads, which probably reflects an assemblage of individual judgements as to whether to use the book as a topical online reference, or to read it as a book and if so whether in print, Kindle, or PDF form. Kindle sales have so far been miniscule, probably reflecting judgements that there is not much advantage perceived in utility over the free eScholarship PDF electronic version.

What should UC do to help support faculty in publishing books in open access? What can universities do collectively?

It would help greatly for universities to provide support services for all the various steps that an author or small publisher needs to take in connection with self-publishing. This would be similar in scope to what many campuses now do to support development of online instructional courses. There is an issue of organizational complexity here, since the services at the campus level are in different budget lines from eScholarship itself. It will help, too, for the use of eScholarship to be made as easy as possible, for example by enabling publications there to be used on e-readers as they continue to develop.

What do you think primarily holds back open-access book publishing at this point?

In addition to the personalized labor and specialized knowledge involved, I think there remains a problem that many people equate open access equates with lower quality. But quality and open access are separate issues. I had ten good individual reviewers for my open-access book on UC. The eScholarship approach of having academic units as individual publishers is a good one, since the units doing the publishing can then devise and implement their own quality-assurance standards.